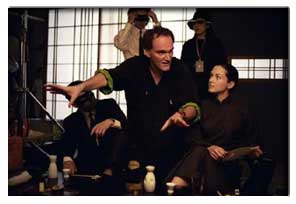 Quentin Tarantino fans will have to wait a long time for his next film after the two parts of Kill Bill.

The director told TV Movie magazine he doesn't like to shoot one movie after the next.

"I don't just want to work, I also want to live and have a lot of sex," he said.

"I'll steal anything," he told the magazine.

He also spoke about how his interest in the film business began when he was thrown out of school aged 16 and started working as an usher at a sex cinema.

Kill Bill is Tarantino's first movie after a five-year break. Critics are divided on the decision to split the film into two.

The first instalment hits cinemas on October 10, with the second part due out next year.