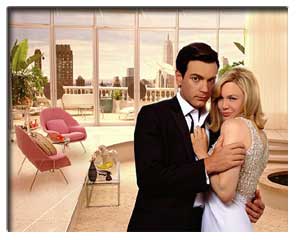 HIS playboy character, Catcher Block is like "James Bond without the espionage" - and he loved every minute of creating him.

Ewan McGregor's new movie Down with Love (2003) premiered in Sydney last night, with hundreds of fans turning up to meet the bearded one. (Audio: Ewan McGregor in Sydney)

"It gave me the chance to be a bit like my kind of movie heroes from that era," he said from the red carpet.

"I was kind of playing a movie star playing Catcher Block, it was good fun."

His wife, Eve Mavrakis, was a bit more revealing - saying there were some similarities between her husband and his character.

In Sydney filming the final Star Wars episode, McGregor, 32, stressed how much he enjoyed acting opposite his Down with Love co-star, Renee Zellweger.

"She's fantastic, she's a diamond, I enjoyed working with her very much and I'd like to work with her again," he said.

He is halfway through filming Star Wars.

"It's going very well  I'll be looking forward to shaving this puppy off," he said while caressing the beard he wears to play Obi Wan Kenobi.

The Scottish star has spent a great deal of time in Sydney with the Star Wars films plus Moulin Rouge - and he has been getting out and about.

"I go to quite a lot of theatre here in Sydney as I like it very much, there's a really good spirit in the young theatre and some of the smaller theatre is fantastic," he said.

At the premiere were BB's Patrick, Wayne Cooper and Sarah Marsh, The Block's Fiona and Adam, Rove McManus and Belinda Emmett.