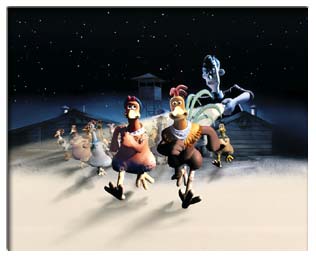 A children's author is taking on Steven Spielberg, claiming the director's production company stole his story for the big-screen hit Chicken Run.

Sussex-based writer Alan Davidson launched a legal fight this week to prove the animated movie was based on his 1995 novel Escape From Cold Ditch.

He alleges that Chicken Run (2000), produced by Spielberg's DreamWorks studio and animators Peter Lord and Nick Park, infringed copyright protecting his critically acclaimed children's tale of a hen that leads an escape from a chicken farm.

And he claims the movie, accredited to Lord and Park, infringes his moral right to be identified as the author.

Mr Davidson, of Hartfield, East Sussex, has refused to comment but a family spokesman said: "This is a matter of principle and honesty."

DreamWorks and Peter Lord's Aardman Animations company, based in Bristol, are named as the main defendants in court papers served on Tuesday.

The papers cite a number of striking similarities between Escape From Cold Ditch and Chicken Run, which became a massive money-spinner netting more than 100 million at cinemas worldwide and from video, DVD and merchandise sales.

A spokesman for Aardman, where Mr Park animated both Chicken Run and the Wallace And Gromit series, said yesterday: "We deny that there is any basis whatsoever for Mr Davidson's claim and we intend to defend the litigation."