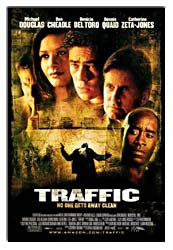 TRAFFIC has been named the best film of the year (00) by the DALLAS-FORT WORTH FILM CRITICS' ASSOCIATION.

STEVEN SODERBERGH, the director of the winning movie and smash hit ERIN BROCKOVICH, was named the Best Director. RUSSELL CROWE was named Best Actor for GLADIATOR, and LAURA LINNEY beat JULIA ROBERTS to the Best Actress award for her performance in YOU CAN COUNT ON ME.