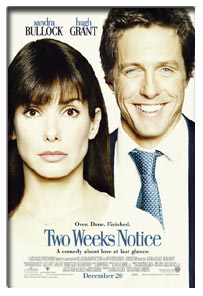 Sandra Bullock and Hugh Grant are reshooting scenes for their new movie amid reports the pair don't get on.

Two Weeks Notice was due to be released in America on December 20. But Bullock and Grant are still on set in New York.

Members of the crew have been walking around with signs sellotaped to their back saying: "Sandy + Hugh = Fights".

The film's director Marc Lawrence is also wearing a sign that reads: "I Hate Myself".

According to www.nypost.com the reshoots are taking place because there is a "total lack of chemistry" between the pair.