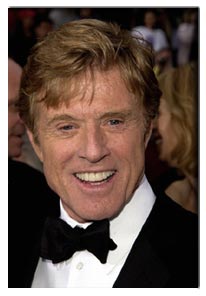 After declaring he would never go under the knife Robert Redford has reportedly undergone cosmetic surgery. Last Castle, The (2001) star, 64, has allegedly had a three-hour canthopexy operation to remove fat and bags around his eyes at a Beverly Hills, California clinic.

In January (2002), Redford declared, "So what if my face is falling apart? I don't give a damn. It gives me character. Everyone in Tinseltown is getting pinched, lifted and pulled, it's an obsession."

According to American reports, the movie veteran went for the plunge after being told by a cinematographer that excess under-eye tissue was interfering with shots of him. One Hollywood surgeon says, "He looks much fresher now. He's also clearly had a mole from his right cheek removed. "