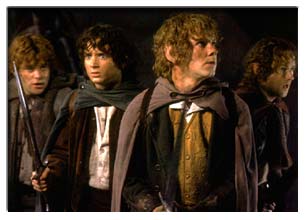 The official Lord Of The Rings: The Fellowship Of The Ring (2001) movie website has attracted more than 350 million hits worldwide since re-launching on 12 January (01).

Bosses say the number of hits has been staggering. The website contains information about the film trilogy, the first part of which is due for release later this year (01).

The first instalment of the Lord Of The Rings: The Fellowship Of The Ring (2001) - is scheduled for release on 19 December (01).

All three films are being shot concurrently, with the same director, PETER JACKSON, and a cast featuring stars such as SEAN BEAN, IAN HOLM, LIV TYLER, CHRISTOPHER LEE and CATE BLANCHETT. (RP/WNWCAN)