Tom Hanks Near Death On Set 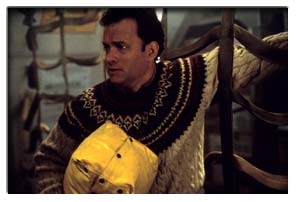 Superstar TOM HANKS nearly died from a toxic infection while filming CAST AWAY.

The FORREST GUMP star ballooned up and down in weight for the desert island flick, and had a team of medics monitoring him during filming in Fiji - but his health still gave him a scare.

He says, "I got a sore on my knee and something got inside there while I was on Fiji. I flew home on a Friday and by Sunday my lower leg had swollen up to twice its normal size. "I went to the hospital and I thought I was going to get it cleaned out and get some antibiotics. "The next thing I knew, I had five doctors running around in a panic, trying to figure out what was inside my leg. I had surgery that night and we shut down filming for three weeks. "I was very close to experiencing blood poisoning, which can kill you." He adds, "That illness showed me just how much life really means." (NFA/WNTMI/PDD)