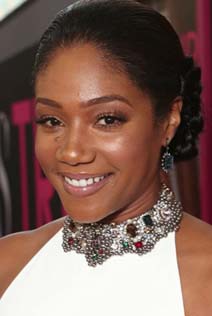 Tiffany Haddish has joined the cast of Nicolas Cage's upcoming meta-comedy The Unbearable Weight of Massive Talent, in which Cage plays a fictional version of famous Hollywood actor Nicolas Cage.

Directed by Tom Gormican (Ghosted) from a screenplay by Gormican Kevin Etten, the Unbearable Weight of a Massive Talent will see Nicolas Cage portray a version of himself desperate to get a role in a new Tarantino movie while also struggling with a strained relationship with his teenage daughter. As he makes his way through life, he also talks to an egotistical version of himself from the '90s who railroads him for making bad movies and not being the same star he was at the time, now dealing with a mountain of death and making an appearance at the birthday party of a Mexican billionaire that is a huge fan.

Haddish broke out in a huge way with her unforgettable antics in Girls Trip and has become one of the go-to comedic forces in Hollywood over the past couple of years, but she's also proven that she can be a bit more subdued when the occasion calls for it. It's rare for her to play characters who are in authority or positions of power, but the idea that she's playing an eccentric rogue agent here should fit right in with the bombastic on-screen persona she's cultivated.

Haddish will be seen next in Bad Trip and The SpongeBob Movie: Sponge On the Run.