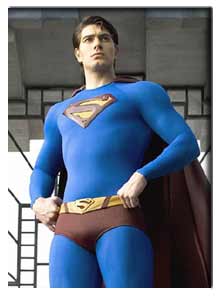 The new Superman is giving movie bosses a headache - because of the size of his bulge.

They fear Brandon Routh's profile in the superhero's skintight costume could be distracting, reports the Sun.

Hollywood executives have ordered the makers of Superman Returns to cover it up with digital effects.

The Sun's source said: "It's a major issue for the studio. Brandon is extremely well endowed and they don't want it up on the big screen.

"We may be forced to erase his package with digital effects."

Brandon, 26, has taken over the superhero's cape from the late Christopher Reeve.

Wardrobe artists have had to fit him with a special codpiece for the new film out next year.