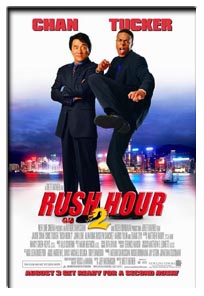 The premiere of action comedy movie RUSH HOUR 2 (2001) will take place onboard a flight from Los Angeles to Hong Kong.

In a joint promotional deal involving producers at NEW LINE, UNITED AIRLINES and the Hong Kong Tourism Board, the new CHRIS TUCKER and JACKIE CHAN film will be shown miles above the earth on July 26 (01), eight days before the sequel hits theatres in America.