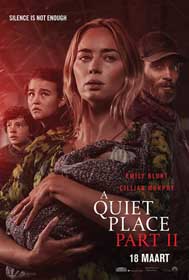 John Krasinski and Emily Blunt's thriller "A Quiet Place II" has been delayed amid concerns around an escalating coronavirus.

The film, which is released by Paramount Pictures, was slated to roll out internationally on March 18, with a U.K. debut scheduled for March 19 and a North American release set for March 20.

The actor took to Twitter on Thursday to break the news to fans, noting it is not the right time for the horror production to debut.

Krasinski wrote: "One of the things I'm most proud of is that people have said our movie is one you have to see all together Well, due to the every-changing circumstances of what's going on in the world around us, now is clearly not the right time to do that."

"As insanely excited as we are for all of you to see this movie... I'm gonna wait to release the film til we Can all see it together! So here's to our group movie date! See you soon!"


Paramount has not set a new release date for the film yet.