Karen Gillan cast in Marvel Guardians of the Galaxy film. 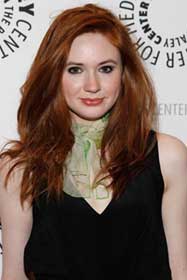 Former Doctor Who actress Karen Gillan has landed a role in Marvel's upcoming superhero film Guardians of the Galaxy.

The 25-year-old will play the lead female villain in the film, according to the Hollywood Reporter.

Benicio Del Toro is also said to have joined a starry ensemble that already includes Glenn Close and Zoe Saldana.