The Great Wall Of Wall-E

THE GREAT WALL OF WALL-E


Children’s TV star Neil Buchanan is to return to his hometown to create his biggest ever ‘Big Picture’, made entirely from rubbish!

On 24 November the Liverpudlian, who hosted 19 series of Art Attack on CiTV - will produce a 35x20ft outdoor aerial collage of WALL-E, the much loved robot from Disney Pixar’s critically acclaimed animation, to mark the film’s launch on Blu-ray and DVD that day.

And just like the hero of the film, Neil is getting inventive in his recycling for his biggest ever Big Picture creation.

From hubcaps and vacuum cleaners to old road cones and tyres  all will be used to recreate the new space age hero who spends his life clearing up after humans on a post-apocalyptic planet earth in the film. The giant collage will only viewable from the air  perfect for space dwellers just like WALL-E.

Said Neil: I’m a big fan of the film and what convinced me to return home for one more big picture were the epic scenes in which the hero systematically attempts to clean up the planet after mankind has immigrated to space. In doing so, WALL-E creates epic towers of scrap, which is what we’ll be doing next Monday!

We’ve designed this Big Picture from scrap materials and key props from the film to welcome WALL-E home and give him a fitting send off to mark the DVD release, says Buchanan, who produced over 180 Big Pictures in 19 series of Art Attack over 18 years.

I’ve spent my television career encouraging children to get inspired by art, and it’s fitting to take inspiration from a Disney Pixar film for my biggest Big Picture yet.

It is no coincidence that Neil has chosen his home city Liverpool to produce his biggest and most impactful picture yet after wrapping his final series of Art Attack, and helping him with his biggest picture yet will be a class of children from a local school, as an educational exercise around the Capital of Culture 2008 celebrations.

Capital of Culture’s legacy year is the Year of the Environment, so it’s fitting for Liverpool to be the venue for a massive picture of WALL-E.

Ever since it was announced that Art Attack would leave our screens after 18 years on CiTV, there have been countless petitions to encourage Neil to build a Big Picture in Liverpool around the Capital of Culture celebrations.

This includes a Facebook group entitled ‘Get Neil Buchanan to do a big Art Attack for Liverpool 2008’ which has over 2,500 members as well as a further 50 groups dedicated to Neil and Art Attack set up this year. 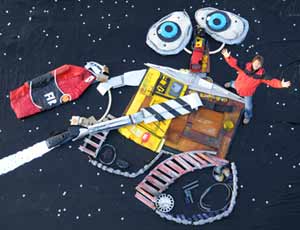