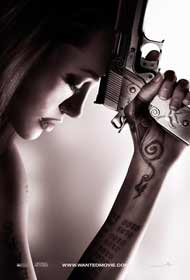 Two posters for an Angelina Jolie film have been criticised by advertising watchdogs for making guns attractive.

The Advertising Standards Authority (ASA) ruled the Wanted posters were not suitable to be seen by children.

It added that the use of a glamorous actress, gun images and aspirational text "could glamorise violence".

But seven people who complained the posters were inappropriate at a time of concern about gun crime did not have that particular view upheld by the ASA.