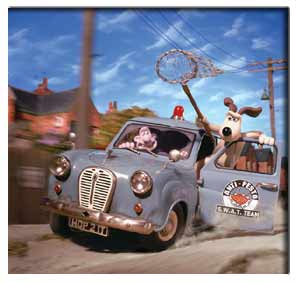 The trailer for the first Wallace and Gromit movie has been posted on the internet.

Curse of the Wererabbit is due for release in the autumn.

It features Wallace and his loyal dog Gromit trying to solve the mystery behind a garden sabotage that plagues their village.

The duo must battle to save the annual giant vegetable growing contest.

Wererabbit is the second full feature film from the Bristol-based Aardman Animation studio and, like 2000's Chicken Run, is backed by Stephen Spielberg's DreamWorks film studio.

Screenwriters Bob Baker and Nick Park previously worked on the short Wallace & Gromit short films A Grand Day Out, The Wrong Trousers and A Close Shave.

The trailer can be viewed at http://www.wallaceandgromit.com/fla/wg.html.

Film Stories : Wallace & Gromit Movie: Curse of the Wererabbit, The (2005)