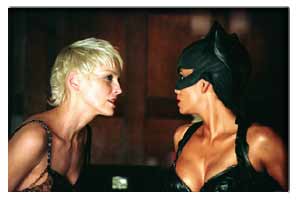 Halle Berry says she will continue to take risks in her career, despite being nominated for three Razzie Awards.

The ceremony which gives awards to the worst films and performances - has nominated Berry in the Worst Actress category for Catwoman. She has two nominations for the Worst Screen Couple award for her chemistry with co-stars Sharon Stone and Lambert Wilson.

The Oscar winning actress says she will not let the box office failure of Catwoman knock her confidence reports Contactmusic.com.

She said:"I never thought I'd ever win an Oscar, a Golden Globe or an Emmy, so I have the sense of feeling no limits.

"I'm proud that I'm continuing to take chances and try new things. Some things work out better than others."

She joked that she is contemplating the Razzie Awards on Saturday night, she said: "I would get the best gown I can to go and pick up the award. It's a good way to laugh at yourself."