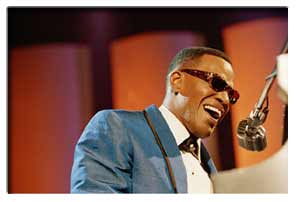 Jamie Foxx and Hilary Swank have picked up the best actor and actress gongs at this year's Screen Actors Guild Awards.

Foxx's role of Ray Charles in Ray has already earned him a Golden Globe award and he is nominated for best actor at this year's Oscars.

Picking up his award Foxx said: "Thank you for Ray Charles for just living so complex and so interesting, and making us all just come together."

Swank was full of praise for her director and co-star Clint Eastwood. "I bow down to you," she said.

Cate Blanchett won best supporting actress for her role as Katharine Hepburn in The Aviator.

Both Foxx and Swank are now considered to be among the favourites to get Oscars.