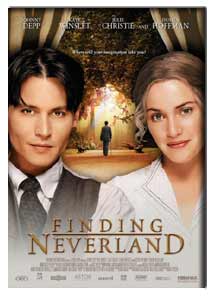 Finding Neverland (2004) has been named best film of 2004 by The National Board of Review.

Starring Johnny Depp and Kate Winslet, the film is a fictionalised account of the creation of classic tale Peter Pan.

Jamie Foxx was named best actor for his role as late musician Ray Charles in Ray, while Annette Bening was best actress for her part in Being Julia.

Winners were chosen by a 150-strong board of US film professionals.

Mel Gibson's The Passion of the Christ and Michael Moore's documentary Fahrenheit 9/11 were honoured for "special recognition of films that reflect the freedom of expression", alongside drama Conspiracy of Silence.

Alejandro Amenabar's The Sea Inside won best foreign language film, while Born into Brothels, a film about the children of prostitutes in Calcutta, won in the documentary category.

A career achievement award was given to Jeff Bridges and Clint Eastwood was honoured for special film-making achievement for producing, directing, acting and composing the score for Million Dollar Baby.

The National Board of Review awards can be an early indicator of what to expect in the Academy Awards in February, though its choices are often more esoteric than the Oscars.

Last year's winner of its best film title, Mystic River, subsequently won best actor and supporting actor Oscars for Sean Penn and Tim Robbins respectively. However, it was beaten to the best picture Oscar by Lord of the Rings: The Return of the King.