The Incredibles continues to be a success 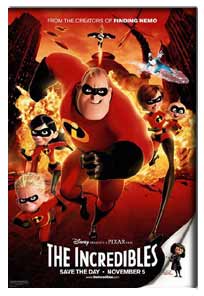 The Incredibles has taken £23.4m on its first weekend on release outside the US and Canada.

The film - which tells the story of a family of superheroes, is the latest movie from the makers of Finding Nemo.

In North America it has taken £113.5m after being on release for four weeks.

In January, Finding Nemo became the first animated film to make more than £264m in ticket sales outside the US.