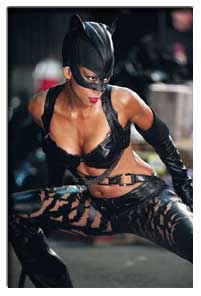 Gwyneth Paltrow has slammed Halle Berry's Catwoman movie, insisting she would have made a much better feline superhero.

Gwyneth says she was desperate to play Patience Phillips, but after watching Berry's "unoriginal" performance in the critically mauled film, she's relieved she agreed to star in new action movie Sky Captain And The World Of Tomorrow instead.

She said: "I did this film because it was something completely different. Although, there is something incredibly appealing about Catwoman, being that woman and playing that part.

"At the time I really wanted the role. But if I was going to take something on, I wanted it to be something that nobody had ever seen or done.

The UK premiere of Sky Captain And The World Of Tomorrow will take place later in London.