Shaun Of The Dead team back at work 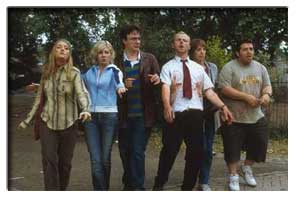 Edgar Wright and Simon Pegg have started work on a follow-up to Shaun Of The Dead.

The British 'rom-com-zom' film was a huge hit for the Spaced team, and has won acclaim from the likes of Peter Jackson, Sam Raimi and Quentin Tarantino.

Wright and Pegg's new film is set to move away from the zombie theme and into the action sphere.

Edgar told empireonline.co.uk: "We want to tackle the action/cop genre. The idea would be to do a sequel in tone to Shaun but to tackle what we think of as the Great British Action Film, in the grand tradition of The Young Americans and Downtime."

Wright said: "I've always found it amusing when I was at college and there was a spate of films out that tried to make out that London and Scotland and Manchester were as action-packed as LA or New York.

"But I don't think there's really been a convincing UK action film. I don't count Get Carter or Long Good Friday because they're more crime films. So I'm not slagging off all the great British crime movies. We just thought it would be really fun to make the UK equivalent of Hard Boiled or Desperado - but very, very English!"

He added: "We've got some good stuff already and when we get back we just want to knuckle down and write it. It will have elements of comedy and action and some kind of horror elements as well."