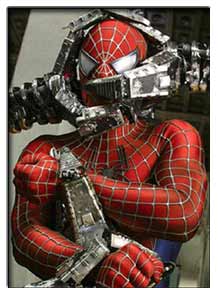 The long-awaited sequel to Hollywood blockbuster Spider-Man had its UK premiere in London on Monday.
Tobey Maguire and Kirsten Dunst star in the movie, which opened in Leicester Square.

Spider-Man 2 has already broken cinema records in the US and Canada, and is expected to do the same in the UK.

Actor Maguire returns as the reluctant superhero and his alter ego Peter Parker.

This time he battles evil in the shape of a new nemesis, Dr Octopus, played by British actor Alfred Molina.

The film opens around the UK on Friday.