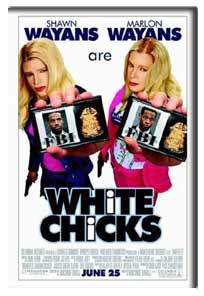 The new Wayans Brothers race comedy White Chicks is at the center of a legal dispute after a production company in Connecticut claimed they had the initial idea for the film. Bosses at A Slice Of Pie Productions claim the film, which has become a surprise summer hit in America, is a rip off of their movie Johnny Bronx. In new court documents, the production company alleges Johnny Bronx was offered to the Wayans as a treatment in 1997.

The premise of the film was a fumbling African American FBI agent who "is converted to a white, Italian- American mobster to infiltrate the mafia". In Keenen Ivory Wayans' new film, which stars his brothers Marlon and Shawn, two tough detectives transform themselves into white socialites to solve a crime. The Wayans insist the idea was brother Shawn's, but A Slice Of Pie chiefs claim some scenes in the film were "almost identical" to those in their treatment and they're suing for damages.