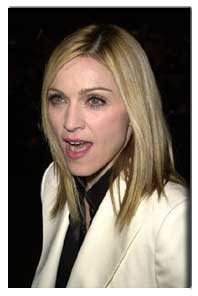 She also became a rebel nightclub host who openly flouted Prohibition laws. She kick-started her stage shows with the hellraising catchphrase Hello Sucker!

The Sun says Madonna will co-produce the film with Scorsese and will also write the music.

It will be shot next year and the soundtrack will be her next album, with the first single a cover of 1920s hit There'll Be Some Changes Made.

The movie will be directed by Jeremy Scott who masterminded Madonna's anti-war video for her hit American Life.

The film arm of her production company Maverick bought the rights to the film in 2001 and planned a stage show but later hit on the movie idea. Madonna's been laying down tracks for it since last year.

Courtney Love was cast as Guinan and even wrote some songs but she has been dropped over her recent drug troubles.