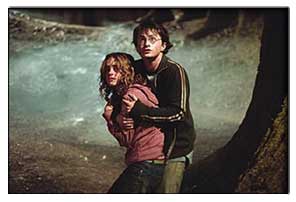 Harry Potter and the Prisoner of Azkaban captured the biggest opening-day box office in British history Monday. Opening on a bank holiday, the third film in the Potter series grossed an estimated $8.75 million, surpassing the previous record of $7.5 million set by the original film, Harry Potter and the Philosopher's Stone in 2001.The film had received lavish acclaim from British critics. Kevin O'Sullivan in the London Daily Mirror wrote: "If you're not a Potter fan by now you never will be. But for the millions of admirers who remain under this bespectacled hero's mesmerizing spell, The Prisoner of Azkaban delivers the goods in spectacular fashion." James Christopher in the London Times singled out director Alfonso Cuarón for particular praise.
"Cuarón's appointment to this franchise is the most inspired Hollywood gamble of the year. He is not a proven director of blockbusters or indeed sequels, but any misgivings about his ability to bring home the lucrative bacon evaporate frame by lavish frame," he wrote.

Those sentiments were echoed by Anthony Quinn in the Sun: "A great move, I think, was to bring talented Mexican director Alfonso Cuaron in to direct the movie. He gives it a depth and sense of danger the others didn't have " Similarly David Gritten observed in the Daily Telegraph: "The third in the Potter series, released on Monday, has a new director, the Mexican Alfonso Cuarón, and it marks a huge stride forward. The Prisoner of Azkaban is far more visually striking than its predecessors. Finally, here is a film that does justice to Rowling's soaring imagination."