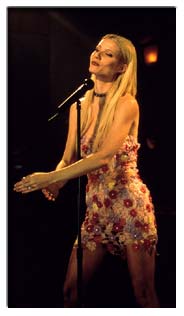 Gwyneth Paltrow has signed up to play Marlene Dietrich.

According to Variety the film will be based on the book about the star by her daughter Maria Riva.

Dietrich's grandson Peter Riva said Paltrow is one of few contemporary actresses who could do justice to his grandmother.

He said: "She has the stillness required in an aristocrat, and the ability to plumb the depths of character without too much emotion, which was Marlene's trademark."

"Like Marlene, she has the kind of body designers love to hang clothes on. And while Frank Sinatra and Ella Fitzgerald taught Marlene to maximize her limited vocal range, Gwyneth is a much better singer. She'll just have to sultry up her voice a bit."

She made her final movie in 1979, the critically panned David Bowie film Just a Gigolo.