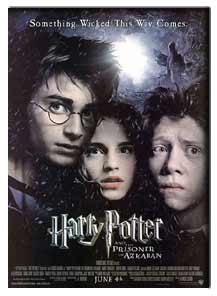 Daniel Radcliffe, who plays Harry Potter, says his character may be killed off in the final book of the series.

The 14-year-old actor believes it's the only way author JK Rowling can bump off his arch-enemy Lord Voldemort.

Daniel said: "I've always had the suspicion that Harry might die. He and Voldemort have the same core. I think the only way Voldemort can die is if Harry dies as well."

Voldemort, known as the Dark Lord, murdered Harry's parents James and Lily and has tried repeatedly to kill him too.

Daniel, speaking to Radio 1's Jo Whiley, said he may be too old to play Harry in future, reports The Sun. The final two books in the seven-book series have yet to be written and Daniel could be verging on adulthood by the time they are filmed.

The star, from West London, admitted he would not want to see anyone else in the role. He said: "It will be difficult to see someone else play the part. It's a possibility."

Daniel also says he's a big rock fan and wants to be in a band.

The new Potter film, The Prisoner Of Azkaban, is released on Monday.