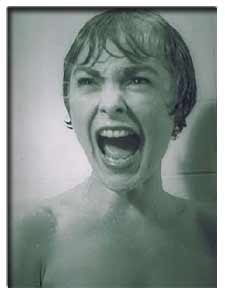 The 44-year-old flick has topped a poll of 50 movies carried out by Total Film magazine.

Psycho comes ahead of other movies such as The Godfather (22nd) and Quentin Tarantino's Reservoir Dogs (23rd). Even favourites like Bambi (6th) and The Wizard of Oz (13th) make it on to the list.

Stanley Kubrick's Dr Strangelove Or: How I Learned To Stop Worrying And Love The Bomb (1964) comes second, with the surreal end of Slim Pickens when he rides the bomb.

Hans Gruber (Alan Rickman's) plunge from a 30-storey building comes fourth in Die Hard (1988), followed by the fatal scene in Bonnie And Clyde (1967).

Total Film magazine deputy editor Simon Crook said: "Some of the deaths in the poll, like The Wicked Witch melting in The Wizard Of Oz, are iconic but laughable, but nearly 45 years on, Psycho's shower scene is still distressing.

"It's the sheer violence of the edit rather than any explicit gore - 70 different angles, over 90 cuts and those shrieking violins. It's a masterclass in montage and audience manipulation."