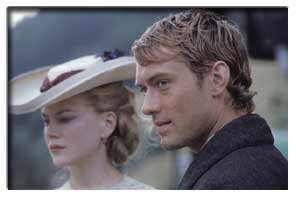 Jude Law is facing a $18 million divorce bill from his ex-wife Sadie Frost. Frost - as part of her divorce settlement demands presented this week in London's High Court - expects Law to pay her a $9 million cash lump sum and the $9 million house they shared with their children. The couple were granted a divorce in October 2003 and have spent the time since preparing for their legal battle over their assets and children. A source tells British tabloid newspaper News Of The World, "Until now they've been arguing on the phone and on occasions have been at each other's throats. Now Jude's got the figures and has been told to consider them. Sadie reckons the £5 million lump sum is just a third of his movie income from the last year in which he's done three films. She argues that she's been with him while his career was growing, through the lean years while he built himself up, and she was his rock. She kept the home going and was there for their three kids." Law - who is dating his What's It All About, Alfie? co-star Sienna Miller - will not have to pay Frost's $36,000 monthly allowance request if she marries her current boyfriend Jackson Scott. The couple's priority concern is the joint custody of their children - Rafferty, seven, Iris, three and 18-month-old Rudy.

Film Stories : Sky Captain and the World of Tomorrow (2004)