End of The World Week 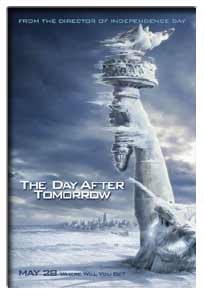 From Mon 17th May, viewers can brace themselves for the coming storm as Sky hosts the ultimate apocalyptic line-up to entertain even the most pessimistic doom monger.

Sky One’s The Day After Tomorrow Exclusive, Friday 21st May at 7.00pm goes behind-the-scenes and looks at the making of the film. The programme includes an exclusive ten-minute preview of the movie cut by director Roland Emmerich and contains footage never before seen in the UK. Cast members Dennis Quaid, Jake Gyllenhaal join Roland Emmerich to talk about the mammoth task of putting the film together. The show also takes a look behind some of the gigantic set pieces in the movie, including the much talked about New York tidal wave and illustrates how the destruction of Los Angeles was achieved by gigantic tornados.

Over on Sky Movies viewers are given the chance to view a bleaker picture of the planet’s future with a series of films themed around the breakdown of civilisation. Christian Bale and Matthew McConaughey deal with a world overrun with fire-breathing Dragons in Reign of Fire. Whilst it's a virus that wipes out most of the population in Resident Evil as Milla Jovovich battles zombies and genetic freaks in this sci-fi horror flick. And for those who believe the Earth’s ultimate fate is to end up as a desert wasteland, what better way to prepare yourself than an evening spent with the ultimate road warrior, Mel Gibson in Mad Max.

Continuing the disaster theme, Sky Box Office will also be showing The Core. Aaron Eckhart and Hilary Swank team up as they attempt to save the earth from imminent destruction by travelling to the one place never ventured before, the centre of the planet.
On Sky Travel a series of programmes devoted to all manner of earthquakes, tidal waves, tornados and other bouts of extreme weather will get viewers batting down the hatches. The line up includes World’s Deadliest Earthquakes, Eye Of The Storm, World’s Deadliest Volcanoes and The Day The Earth Trembled amongst many other documentaries that showcase nature at its most fierce.

Also on Sky One, A double bill of The Simpsons and an episode of Futurama bring a touch of levity to the situation. In The Simpsons, Springfield is horrified to discover a comet named Bart is on a collision course with the town whilst the other episode has Ned Flanders picking up the remnants of his life when a Tornado destroys his home. For the occupants of Futurama it’s a man made disaster that threatens them as they discover a colossal bunch of stinking garbage is set to destroy New York City.

And if you’ve reconciled with the fact that it’s all going to end and there’s nothing we can do about it then tune into The Amp which will be playing a selection of Videos to Watch Before the end.

End Of The World Week  Watch before there’s nothing left to watch it on.

Sky Box Office
From Wednesday 19th May - The Core

The Day After Tomorrow Exclusive will also be repeated on