Jonathan Ross gets Two for One 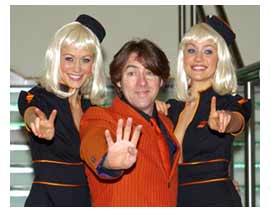 London, 30 March 2004. Speaking on behalf of Orange and the UK cinema industry Jonathan Ross today announced that film lovers who own an Orange mobile phone can now take a friend to the cinema for FREE every Wednesday in cinemas nationwide.

The initiative, called ‘Orange Wednesdays’, which launches on 31 March 2004, has been developed in partnership with the UK cinema industry to encourage movie lovers to visit the cinema more often, and enjoy a wider range of films.

Jonathan Ross, said of the venture: This is great news for film fans everywhere, ‘Orange Wednesdays’ will be a massive box-office hit. Just think, you can take a friend or relative to the movies for free, every Wednesday!

For the first time in UK cinema history a mobile ticketing service has been introduced so that Orange customers can buy two cinema tickets for the price of one. Customers obtain a unique reference number by simply texting FILM to 241, speed dialling 241 or visiting the Orange World WAP portal. Tickets are redeemable at participating cinemas across the UK*.

Jeremy Dale, Vice President of Brand Marketing for Orange UK, commented: Everyone loves a great film and the introduction of Orange Wednesdays will help to make 2004 a golden year for the nation’s film fans. Orange customers will now be able to use their phone as a season ticket for the cinema.

Barry Jenkins, Chairman of (AIM) All Industry Marketing for UK cinema, added The UK film and cinema industry is a vibrant mix of over 150 distribution and exhibition companies representing the diverse range of the film/cinema experience. Over the last 20 months we have worked with Orange to develop a ground breaking interactive communications campaign to promote film and cinema across the UK.

The initiative signed for an initial three-year period, will also offer Orange customers the opportunity to access information on every film released in the UK and the opportunity to personally connect with their own choice of film titles at any time. In addition, Orange customers will be able to access exclusive mobile phone content to more than 12 film releases during 2004. These ‘Orange Featured Films’ will showcase a very broad range of films, from historical epics to hysterical comedies, festival favourites, animated adventures and international award winners. The first two Orange Featured Films to be announced are ‘Troy’ and ‘The Day After Tomorrow.’

*The unique reference number, received by return text, can be redeemed at the majority of UK cinemas. Customers will receive two tickets for the price of one paid ticket on any Wednesday throughout the year.