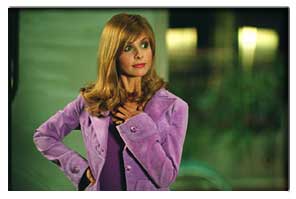 Sarah Michelle Gellar says her ambition is to appear in a martial arts movie.

The Buffy and Scooby Doo star says she would have loved a role in Quentin Tarantino's Kill Bill.

The 26-year-old also says she'll make the move to theatre one day. She said: "I would absolutely love to tread the boards in London. That's something I will do. Maybe not this year, but it's on the horizon, definitely."

Gellar admits she's still coming to terms with the end of Buffy. "Every day I ask myself did I do the right thing? There are so many things I miss about the show. I can go to the gym every day and do all the physical action stuff, but I miss it for so many other reasons."

Cinema fans can see her in Scooby Doo Too: Monsters Unleashed. The sequel meant she got to work with husband Freddie Prinze Jr. "There was no making out. What people don't realise is that when we go to work we're actors and when we go home, we're a couple, " she said.

The movie sees the monster hunting gang of Mystery Inc lose their cool when they're confronted with a masked villain wreaking mayhem.

For Gellar, who plays purple-loving Daphne, it was another chance to do what she loves best - kick some serious butt.

The star is an expert in gymnastics, sword-fighting and Tae Kwon Do and says her ambition is to appear in a martial arts movie. "My favourite is a Korean movie called Hero, which has horseback fighting and fight scenes on water. It's just amazing."

Gellar has just returned from a three month trip to Tokyo shooting The Grudge, and says she fell in love with Far Eastern culture.

As for future projects, she says: "I've achieved more in my 26 years than I ever thought I would and so now I can choose to do film, TV or theatre because I want to work with someone, or I want to go to an exotic location. I really can't wait to go to work."