Night of memories at remake premiere 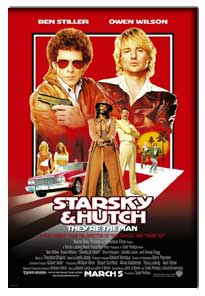 The stars of cult TV classic Starsky and Hutch took a trip down memory lane as the Hollywood movie remake received its UK premiere.

They were reunited with their red and white Ford Gran Torino, which took pride of place on the red carpet.

The carpet itself had been painted with a white stripe in homage to the famous car.

Hard to believe that the actors were once international heartthrobs after the TV series turned them into superstars.

Glaser said he had fond memories of the show, but revealed he had hated one thing about it - the car.

"I never liked that car," he said.

The multi-million pound remake is a comedy, and Stiller and Wilson have given the detective duo a decidedly camp makeover.