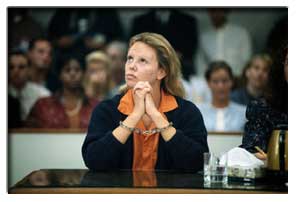 Oscar winner Charlize Theron was reduced to tears when former President Nelson Mandela praised her for putting South Africa on the map.

"I love you so much," the actress said during an emotional meeting at the Nelson Mandela Foundation in Johannesburg.

Theron, who won an Academy award for Best Actress for her portrayal of a serial-killing prostitute in the film Monster, grew up in the small South African town of Benoni.

Wearing a simple white dress with her hair pulled back in a ponytail, she told Mandela he was an inspiration to her and many others.

"She has put South Africa on the map," he said. "Even those who were ignorant of South Africa, having seen her, they must know now that there is a country like South Africa