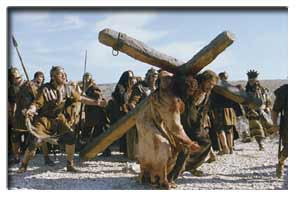 Mel Gibson's The Passion Of the Christ (2004) has broken the US five-day box office record held by The Lord Of The Rings: Return Of The King (2003).

Gibson's controversial religious movie took £69.9 million in its first five days, beating the Lord of the Rings by about £600,000.

Some Jewish leaders have attacked the film and Gibson, who co-wrote and directed it, for portraying Jews negatively.

But the controversy has raised the profile of the movie, about the last hours of Christ's life, and made it the most successful religious film in history.

Churches across the US booked up whole cinemas for their congregations to see the film as soon as it was released.

As well as breaking the record for the five-day total for a Wednesday release, The Passion is sixth in the all-time list of films' first weekend takings, according to industry publication Screen Daily.