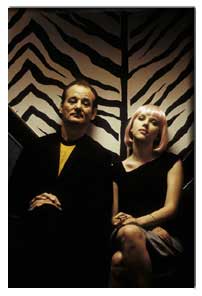 Lost in Translation co-stars Bill Murray and Scarlett Johansson have picked up the Best Actor and Best Actress accolades at the Baftas.
Johansson, who picked up an award for actress in a leading role for the Sofia Coppola film said: "Oh my God, this is really unexpected".

Her voice breaking she thanked the director for "writing and directing this incredible film, which I was so proud to be part of."

The 19-year-old, who has been acting since she was eight and first gained acclaim playing Kristin Scott Thomas's daughter in 1998 film The Horse Whisperer, went on: "Mostly I would like to thank my mother for supporting me and for being there for me and taking me for auditions and buying me hot dogs afterwards."

She said: "I really thought I'd cancelled myself out, I never thought it would actually happen, so I'm thrilled. I feel kind of funny actually, it hasn't sunken in yet. I'm really elated because I've been working in this industry for 11 years and feel finally, as an adult, I'm able to have an impact."

She thanked co-star Bill Murray "for being on the other side of the camera  it was an honour."

Murray won huge applause when his name was read out as the recipient for the Actor in a Leading Role Bafta for the same film, which is set in Tokyo.

The film's director read out a fax from the 53-year-old star who was with his family, saying: "Thank you very much. It comes as a huge surprise too huge I'm afraid."

In the fax, in reference to his fellow nominees Bill Murray joked: " Benicio (Del Toro), Johnny (Depp), Jude (Law), and Sean (Penn)....that's all. If you happen to see them tell them I mentioned them."