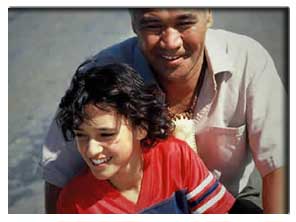 THE youngest-ever contender for a best actress Oscar, 13-year-old schoolgirl Keisha Castle-Hughes may be the toast of Hollywood, but her friends are making sure she doesn't get a big head.

The young New Zealander, nominated for the top acting prize for her role as a girl who tries to persuade her grandfather that she should be allowed to lead her Maori tribe in ``Whale Rider (2002),'' said her school chums were mercilessly keeping her feet on the ground.

Castle-Hughes told journalists at a lunch banquet thrown in Beverly Hills that her pals were unfazed by the success that has brought her to Hollywood this week to charm Oscar voters ahead of the February 29 awards ceremony.

"They just say, 'It doesn't matter, because you're still Keisha','' said the easy-going teenager, who is set to return to school for a week before returning to Los Angeles for the Oscars ceremony.

She said she was "overwhelmed'' by the attention being lavished on her by the world's press and Hollywood movie moguls keen to see her make good on her historic nomination.

"It's a big privilege, but I'm really nervous. I'm really happy, but it's kind of strange - it's going to be crazy.''

It's crazy. New Zealand is such a small place and coming all the way out here ''

The rising movie star, up against huge stars such as Diane Keaton and Charlize Theron for the Oscar, said she was awestruck to meet movie royalty who she had previous only seen on the screen.

"I just met Charlize Theron and was like. 'Oh my God, oh my God,'' she told journalists ahead of the Oscar luncheon that celebrates the honour of being nominated for one of cinema's highest awards.

Castle-Hughes said she was unsure what she would say if she won a coveted golden statuette and had not yet decided what to wear to the star-studded Oscars ceremony, but said she wanted to sport a Kiwi-designed outfit.

Oscar pundits say Castle-Hughes could well snatch the Oscar from under her famous co-nominees if Oscar voters opt for her against the current favourite in the category, Theron, nominated for the true-story Monster.

The youngest-ever Oscar winner was Tatum O'Neal, a winner for supporting actress at age 10 for Paper Moon.

Castle-Hughes' nomination added to a strong New Zealand showing in the Oscars with the third film in Peter Jackson's `The Lord of the Rings trilogy scooping 11 nominations, the most of any film and one more than the Australian-made Master and Commander: The Far Side of the World.