Kidman to star in new musical 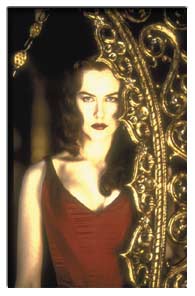 Nicole Kidman is to take on the lead female role in another musical.

Kidman, who starred in Moulin Rouge, is to play Ulla in The Producers.

She will be the Swedish bombshell secretary of Max Bialystock and Leo Bloom.

Bialystock and Bloom will be played by Nathan Lane and Matthew Broderick, who turned the characters into one of Broadway's biggest recent hits.