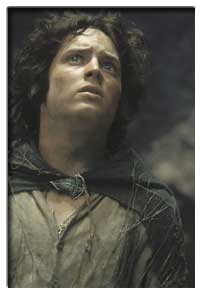 Elijah Wood has reportedly upset his Lord of the Rings co-stars by showing off a secret tattoo on TV.

Wood and another eight actors all had the word 'Nine' in Tolkein's invented Elvish language tattooed on their hips.

The nine actors, who made up the Fellowship of the Ring in the trilogy, vowed never to reveal the tattoos on screen, reports the Channel 4 website.

But Wood showed off his marking on the US showbiz news show Access Hollywood, annoying co-stars like Billy Boyd and Orlando Bloom.

Boyd said: "We made a rule that we'd never show the tattoo on camera."

And Bloom added: "He shouldn't have done that. I guess it just slipped his mind."