Matt Damon talks about life as a Siamese twin 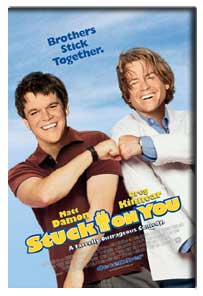 Matt Damon had to endure some marathon sessions in the make-up chair for his latest role as a Siamese twin.

He stars with Greg Kinnear in Stuck On You, a black comedy about two brothers who go to Hollywood to seek fame despite being joined at the side.

But Damon told Radio 1 that being stuck to your co-star for over 12 hours a day was no fun at all: "We were falling, bumping into things.

"We would get up at three in the morning and they actually had to do all the hard work. We just had to kind of stand there and not move for 12 hours which was kind of an exercise in patience I guess."

The film is made by the Farrelly Brothers who did There's Something About Mary, Kingpin and Me, Myself & Irene. Damon says he was pretty sceptical about taking the part at first, but realised that it wouldn't be done in bad taste.

He said: "The Farrelly brothers have a lot of love for these two characters. They've been working on this movie for 12 years. There were all these different incarnations in which Jim Carrey and Woody Allen were gonna be been paired together.

"Listening to them talk about these two characters, it was kind of clear that it would be a movie with some tasteless jokes in it but that it was done really appreciatively and respectfully and the two guys at the centre of the movie are winners throughout and are accepted for who they are."