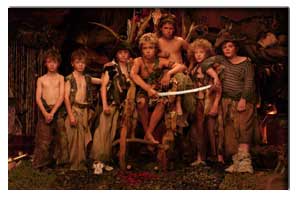 Hollywood's latest version of Peter Pan had fans hooked at its world premiere.

The £65 million movie stars newcomer Jeremy Sumpter as the boy who would not grow up.

More than 1,000 fans turned out in London's Leicester Square for the charity premiere.

The role of Wendy went to 13-year-old British schoolgirl Rachel Hurd-Wood. She has only ever acted in a school play before but the teenager from Godalming, Surrey, beat hundreds of hopefuls to the part of Wendy, the little girl who joins Peter on a journey to Never Never Land.

American actor Sumpter, 14, was greeted by screaming female fans and was clearly revelling in his new-found heartthrob status.

"I guess I'll get girls following me now," he said. "It's what every guy wants and hopefully it will now happen to me. It's cool how many people were shouting for me when I arrived, I love it."

The film has been part-financed by Harrods boss Mohammed al Fayed in memory of his late son Dodi who was the co-producer of Hollywood's last Peter Pan movie, Steven Spielberg's Hook.

Tonight's charity premiere was in aid of Great Ormond Street Hospital for Children. In his will, Barrie left the copyright of the children's classic to the London hospital.