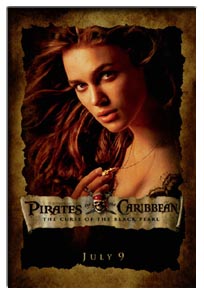 British actress Keira Knightley has topped a magazine poll as this year's top breakout movie star. The 18-year-old beauty first came to the attention of international audiences in the sleeper hit Bend It Like Beckham and continued to wow her fans with roles in summer blockbuster Pirates Of The Caribbean: The Curse Of The Black Pearl and Love Actually. She has now just finished playing warrior Guinevere in the upcoming movie King Arthur, which is expected to expand her fan base even more. Hollywood producer Jerry Bruckheimer, who chose Knightley for both Pirates of the Caribbean and King Arthur, says, "She can act. With Keira, you don't see the wheels turning." Bruckheimer's sentiments have been echoed by Entertainment Weekly, which has named Knightley the top breakout star of 2003. Others named in the poll include Shia Labeouf, Naomie Harris and Peter Dinklage.