The Cat in the Hat defies critics 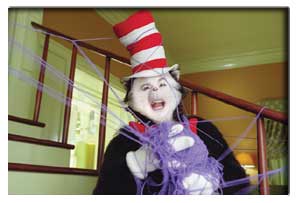 Dr. Seuss' Cat in the Hat, The (2003) shot straight to the top of the North American box office despite a poor reception from the crititcs.

The film of Dr. Seuss' children's book, starring Mike Myers, took £24 million at the box office over the weekend.

That was more than double the £11.7 million ticket sales for Halle Berry's supernatural thriller Gothika which premiered in second place.

Last weekend's top movie, Elf, slipped to third place, ahead of Russell Crowe's Master and Commander: The Far Side of the World.

Love Actually was fifth, The Matrix Revolutions down to sixth and Brother Bear at seven. The rest of the top ten were made up of Looney Tunes: Back in Action, Scary Movie 3 and Radio.