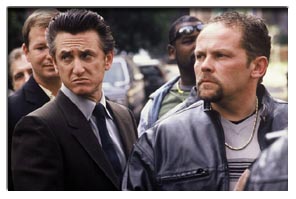 Clint Eastwood's acclaimed movie Mystic River (2003) has been tipped as an early Oscar favourite by US film critics, according to reports.
LA Times critic Patrick Goldstein has put the thriller favourite to win best picture at 6-1, reports The Guardian.

Mr Levy, a film critic for Variety newspaper, also predicted best actor nominations for Bill Murray for Lost in Translation (2003), Tom Cruise for Last Samurai, The (2003), and Russell Crowe for Master and Commander (2003).

The best actress title could be fought between Naomi Watts for 21 Grams and Gywneth Paltrow for Sylvia, according to Mr Levy.

His outside bets include the animated Finding Nemo, The House of Sand and Fog, starring Sir Ben Kingsley, Master and Commander and The Last Samurai.

Mr Levy told The Guardian he predicted big-budget epics "would stage a big comeback" during the awards season.

There has already been a long-running row about next year's voting, following the Motion Picture Association of America's (MPAA) decision to ban preview DVD tapes being sent to voters.

Protesters feared this would jeopardise the chances of smaller, independent films because voters would not have time to go and see all the films eligible.

The ban was overturned for preview tapes or DVDs to be sent to Oscar voters but not for other awards, leading some organisations such as the LA Film Critics' Association to cancel its annual prize-giving in protest.