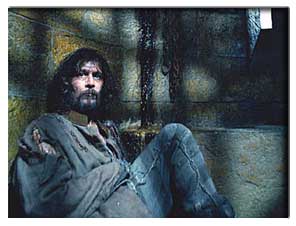 A trailer is being released this week in British cinemas to preview the third Harry Potter film, The Prisoner Of Azkaban.

In the film, Harry fears for his life after mass murderer Sirius Black escapes from the wizards' prison Azkaban.

New pictures put out ahead of the film's release next June show Black, played by Gary Oldman, languishing in his cell in Azkaban before his escape

In another scene, Draco Malfoy, Harry's enemy at Hogwarts, watches a paper bird float from his hand.

Draco, played by Tom Felton, 16, has replaced his slicked-back hair with a floppy fringe in the new film.