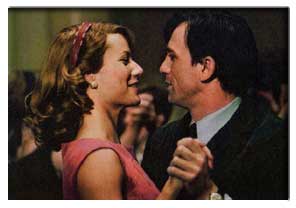 Chris Martin lent girlfrien Gwyneth Paltrow his support by branding her latest film as her best ever.

The Coldplay frontman, arriving at the premiere of Sylvia at the Odeon in Leicester Square, said he had watched the film at least 10 times.

Paltrow, wearing a black strapless knee-length dress by Valentino said she had done a huge amount of research for the film's lead role of poet Sylvia Plath.

She said she had read a lot of her journal, all her poems and letters she sent home to her mother as well as speaking to two of Sylvia Plath's friends.

In the film Paltrow plays the tortured poet during her well-documented marriage to former Poet Laureate Ted Hughes.

Screenwriter John Brownlow said he had tried to portray both lead characters sympathetically and had tried to avoid blaming either one.

He praised Paltrow her depth and resources as an actor. He said on one scene where she was crying she had everyone else on set crying as well. "Everyone was very impressed. She is amazing," he said.

Arriving at the premiere, which marked the end of the 47th London Film Festival, Gwyneth said she had "read and read and read" in preparation for the role. She said she had given the film "everything she had" and was thrilled that people had reacted so well to it.

"When you play someone who is not fictional you have a great responsibility to stay true to the character, especially someone like Sylvia who is so brilliant and complicated," she said.