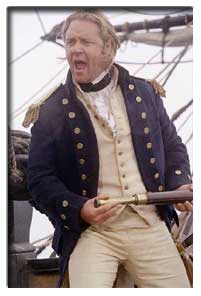 Russell Crowe says he had to overcome a fear of heights and water for his latest role.

Crowe plays Captain Jack Aubrey in the seafaring epic Master and Commander: The Far Side of the World.

The role relies on its hero being comfortable on the high seas and in high rigging. But Crowe told Vanity Fair magazine that both terrified him.

He blamed the trauma of being stranded at sea as a child when his boat ran out of fuel. To prepare for the part Crowe logged hundreds of miles on the ocean, sailing and motoring around the South Seas.

He told the magazine he used to take travel sickness pills, but then decided to give up taking them. By the time the film was ready to shoot, Crowe says he'd overcome his seasickness, but was still afraid of heights, says the Daily Telegraph.

At one point, he claimed, they were going to cheat for a fellow actor and mock up the top of the rigging, but he persuaded them to do it for real. "You can't wrap yourself in cotton because you're an important entertainer. You're only entertaining people if you are servicing the character."

"I did my best to try to be a bloke, because you have to be a bloke if you want to live in Australia. But I'm not really a bloke, you know. I'm a very interior person."

Crowe claims to have rejected millions of pounds' worth of film roles to be present when his wife, Danielle, gives birth in January. But then it is back to business when he starts filming Cinderella Man, a movie about a Depression-era prizefighter.