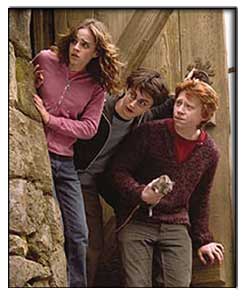 Harry Potter film star Daniel Radcliffe has confirmed he will appear in the fourth film, the Goblet of Fire.
Radcliffe is currently filming the third of the adventures, Prisoner of Azkaban, but there were rumours he would be too old for further films.

But he told the official Harry Potter website: "I will certainly make Goblet of Fire."

Radcliffe, who is now 14, said he did not know if he would be involved in fifth story The Order of the Phoenix.

Radcliffe also said he did not know if Rupert Grint and Emma Watson - who play Ronald Weasley and Hermione Granger - will take part in the fifth story.

"It always feels good working with Emma, Rupert, Tom (Felton, Draco Malfoy) and Matthew (Lewis, Neville Longbottom). We have become very good friends and as this is now the third film we have made together our relationships just get stronger," he said.

Radcliffe said during the interview that when he was not filming he led a normal teenager's life.

"As far as I am concerned I am a normal person. I go back to school when I am not filming, I go out with my friends, I go to the cinema - all the normal things that teenagers do," he said.

"There is an assumption that I cannot leave my house without being hounded - that is not the case. I am able to do many more things than people think I can."