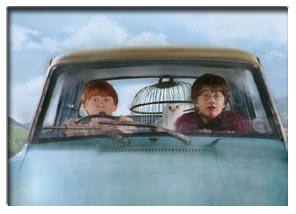 Fans of Harry Potter are to get the opportunity to land two roles in the next film of the wizard's adventures.
The walk-on parts will go to the two highest bidders at a gala charity event next month.

Author J.K Rowling is offering the chance to play the roles in aid of the Multiple Sclerosis Society Scotland charity.

She has campaigned for the charity since the death of her mother Anne from the illness 13 years ago.

Guests will pay £175 each for a ticket to the event in Edinburgh on 28 November when the roles will be auctioned off.

The author has spoken of her reasons behind her close support for the charity.

"Being able to campaign for multiple sclerosis is the most meaningful thing to have come out of being famous," she said.

"It would mean everything to me if I thought even one person did not have to go through what my mother did."

The first two Potter movies have broken box office records, grossing over £1bn between them.

Producer David Heyman is understood to have left the script of the third movie open for two extra characters.

Filming for Harry Potter and the Goblet of Fire is scheduled to begin next April.

The charity gala, hosted by magician Paul Daniels, will take place at the National Museum of Scotland.

Meanwhile, Rowling, who is a friend of Chancellor Gordon Brown's wife Sarah, has been visiting the couple in hospital in Edinburgh to congratulate them over the birth of their son, John.

Mr Brown joked: "That was the first reading lesson."